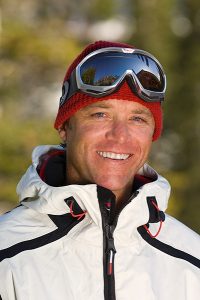 2-Time Olympian and U.S. Ski Hall of Famer, Trace Worthington wrapped up an impressive freestyle skiing career by earning 37 World Cup victories, 7 world titles, 11 national titles and a total of 79 podium finishes on the FIS World Cup Freestyle circuit. Trace remains the most decorated male freestyle skier in U.S. history and #2 in the world for the most victories ever in the history of men’s freestyle skiing competition.

As the first U.S. aerialist ever to ever perform a quadruple-twisting-triple-backflip -in official competition, Worthington helped pioneer the sport of freestyle skiing into the Olympic Winter Games. Following in the footsteps of his late great grandfather Harry Worthington, who competed in track and field at the 1912 Stockholm Olympics, Trace also became an Olympian and was a member of both the 1994 U.S. Olympic team in Lillehammer and the 1992 U.S. Olympic team in Albertville. He competed in freestyle aerials in both Olympics, as well as moguls in 1994.

Worthington participated in the Winter X Games as a Ski-Cross athlete placing 7th in 1999. During the 1994-95 season, he claimed two World Championship gold medals, the first of anyone achieving double World Champion titles. He was named “U.S. Freestyle Skier-of-the-Year” four consecutive years by Ski Racing Magazine (1992, 93, 94, 95) and in 1993, Ski Racing also dubbed him International Skier-of-the-Year. Throughout his career, Worthington was featured in three Warren Miller films, four RAP production films, and a variety of global commercials.